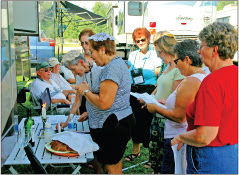 Chavurat Yehudim—CHAI, a congregation on wheels with no walls and the sky for its roof. CHAI has now grown to 165 coaches (the “family unit” of the motor-coach world), comprised of Reform, Conservative, Orthodox, and secular Jews, and some non-Jews too; families, couples, and singles; teachers, lawyers, accountants, and entrepreneurs; and many retirees. http://www.chai-fmca.org/
CHAI’s first Friday night service was held in January 2004 in a Claremore, OK campground, where a designated “challah finder” had to drive 60 miles roundtrip to obtain the ritual bread. Nowadays, organizing the service typically involves arranging camping chairs in a circle and setting up folding tables with noshes and drinks. As dusk settles, a folding table becomes a bimah, a challah replaces snacks, and candles and Kiddush cups appear. Voices join in prayers as the stars fill the heavens. By Anna Lee Braunstein for Reform Judaism Magazine, Fall 2010 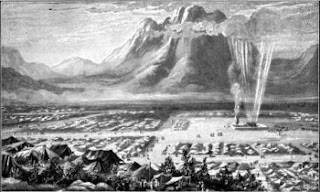 Click for Shabbat camping photos and suggestions from The Traveling Rabbi
Posted by MSL at 10:16 PM

Of all the Jewish holidays and festivals, Sabbath is the only one mentioned in the Ten Commandments. Set apart by God as a day of calm retreat and reflection, the Sabbath is considered the most important of all holy days by Jews. Rabbi Arthur Gilbert 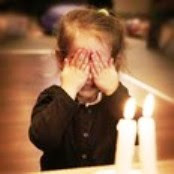 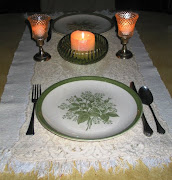 Although many Jewish men and women don’t take the time to perform this ritual at home, the Shabbat (Sabbath) candle-lighting ritual represents one of the quickest and easiest, and, therefore, practical spiritual practices I know. You need only clear off the kitchen or dining room table, place a pretty table cloth upon it to prepare your “temple” for Shabbat, or the Sabbath. Even a few small actions will create a mikdash ma’at, a small sanctuary, in your home on Erev Shabbat, the evening Shabbat begins...
Nina Amir 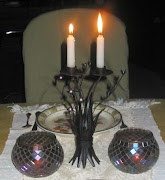 It is customary to light two candles for the two important Biblical references: "Remember the Sabbath" (Exodus 20:8) and "Observe the Sabbath" (Deuteronomy 5:12). However, many families light an additional candle for each child and some people light seven candles for the seven-branched menorah.

How wonderful it is that nobody need wait a single moment before starting to improve the world.
Anne Frank

The genius of Shabbat is that it restores a sense of values and priorities. It "forces" Jews to leave their computers and offices, thus reuniting them with friends and family members who more urgently need their attention, their company, and their devotion.
Daniel Gordis

Click to read and listen to traditional Shabbat blessings for Friday night and Saturday morning.

Shabbat for a Crowd

from The Sabbath by Rabbi Abraham Joshua Heschel

I think the most delicious Shabbat chicken I ever ate on a Friday night was in Furnace Creek, Death Valley, in September 1973, where I went camping with my roommate... I took a Cornish hen, cut up a raw onion and a raw tomato into a few wedges, and put them in the cavity of the hen, then wrapped the whole thing in aluminum foil, and stuck it into the coals of the fire. Corn on the cob and baked potatoes are also delicious when cooked this way.
Bob Gerver

Click to see the blessing that men and women say over
Shabbat candles.

When the UN tried to change Shabbat

Article from 1956, important for today 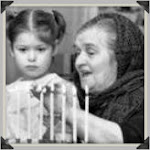 Be it ever so humble, there's no Shabbat like home.

In each drop of dripping candles

A circle of life

Over heaven, and earth

The beginning to the unknown

Into its illumination of the heart

For something to blossom

By the weeping melody

Of an element a part of rain

A desert flower in the rain 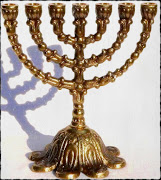 The 7-branch Menorah symbolizes the 7 days of Creation, and the center light represents Shabbat, the centerpiece of our week. Click photo for menorah history on Wikipedia.

Click Deliah to learn about daily, gentle Shabbat for the body